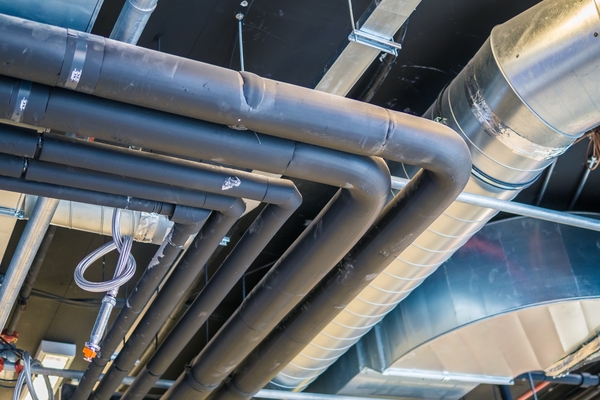 Risk potential of HVAC airborne transmission of SARS-CoV-2 cannot be fully defined as the hazard relationship evidence base is not well established yet.

An example approach to the identification of risk potential is defined in the following, based on previous studies on filtration and infectious disease airborne droplet sizes.

We recommend industry and research groups continue to develop the evidence base for detailed hazard and risk assessment of HVAC airborne transmission of SARS-CoV-2.

Other considerations which could affect HVAC airborne transmission which can only be assessed on a system by system basis;

Areas should be prioritised considering:

I) number of key staff present/staff density/ability for social distancing
ii) frequency of visits to the area
iii) frequency of interactions with other department staff, e.g. Utilities team and production teams

Risk by system of HVAC airborne transmission of SARS-CoV-2

Systems with a higher risk of airborne transmission include

For higher risk of non-airborne transmission, system characteristics could include

The industry guidance has the following major action areas relating to the control of airborne transmission of SARS-CoV-2 in (non-GMP) HVAC systems during an epidemic or outbreak; these key points should be considered fully during any risk assessment. In addition, a list of practical actions is provided in Part 3.

Guidance recommends increased filtration levels during epidemic periods, with the general assumption that higher filtration effectiveness will be more effective at removing any potential airborne droplets, lessening risk. There is no benefit to increasing filtration of outside (fresh) air. Risk assessment considerations should include;

Outside Air quantity (AQ) and recirculation

Guidance recommends increased outside air quantities during epidemic periods, with the general assumption that more outside air will dilute any potential airborne droplets, lessening risk. Reducing or eliminating recirculation has also been cited as risk reduction action; however, this should be considered in the context of the specific systems under consideration. Risk assessment considerations should include:

Any proposed changes to filtration should plan to revert to agreed design operating levels in the post-epidemic situation.

Guidance recommends increased airflow during epidemic periods with the general assumption that more airflow will increase both outside air and frequency of air passing through filtration, lessening risk. Risk assessment considerations should include:

Any proposed changes to airflow rates should plan to revert to agreed design operating levels in the post-epidemic situation.

Out of hours airflow

Guidance recommends increased building air flushing pre- and post-occupancy, with the general assumption that more airflow in these times will decrease bio-burden, lessening risk. Risk assessment considerations should include:

Any proposed changes to airflow rates or controls should plan to revert to agreed design operating levels in the post-epidemic situation.

Look out for Part 3 of this article which will be published next week.